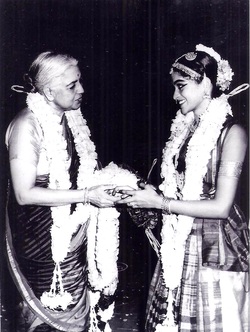 On the day of her Arangetram
Smt. Jayashree Narayanan  received her Diploma and PG Diploma from Kalakshetra, Chennai. She is also a recipient of Govt. of India scholarship and acquired advanced training from Kalakshetra. She was also a concert section artist at Kalakshetra for a year. She possess good knowledge in both vocal singing and kathakali, a kerala theatre art form.

She has traveled all over India and East European countries along with Kalakshetra troupe and given programs. She has also taken lead roles in Kalakshetra Dance Dramas like "Shaklunthala" in Shakunthalam, "Seetha" and "Surpanaka" in Sabari Moksham, "Kaikaeyi" in Rama Vanagamanam and other roles like Karumariamman, Mandodari etc. She is a B High Drama Artist in A.I.R, Pondicherry. She again participated in Kalakshetra's Golden Jubilee Celebration in 1985 and took the lead role kaikaeyi again.

She has co-authored a book titled "Folk arts of Tamil Nadu", the section on folk dances of Tamil Nadu. Currently contributing articles in the magazine "Barani". She headed the dance departmentof Bharathiar Palkalai Koodam, Pondicherry during the period 1988-1999. She was also the Principle in-charge of Bharathiar Palkalai Koodam during the year 1999-2005. She was invited by Singapore Indian Fine Arts Society as an examiner in 2005 and 2006. She has contributed in setting the question papers for B.A, M.A Dance and NET examinations. She was also a practical examiner at Kalakshetra, Bharathidasan University and Bangalore University. She is a member of board of studies in Madras University and Bangalore University. She was invited by CCRT to frame the syllabus for Junior Level Dance Scholarship holders.